QUALCOMM LAUNCHED AN EXCLUSIVE PLATFORM FOR THE DEVELOPMENT OF AR GLASSES 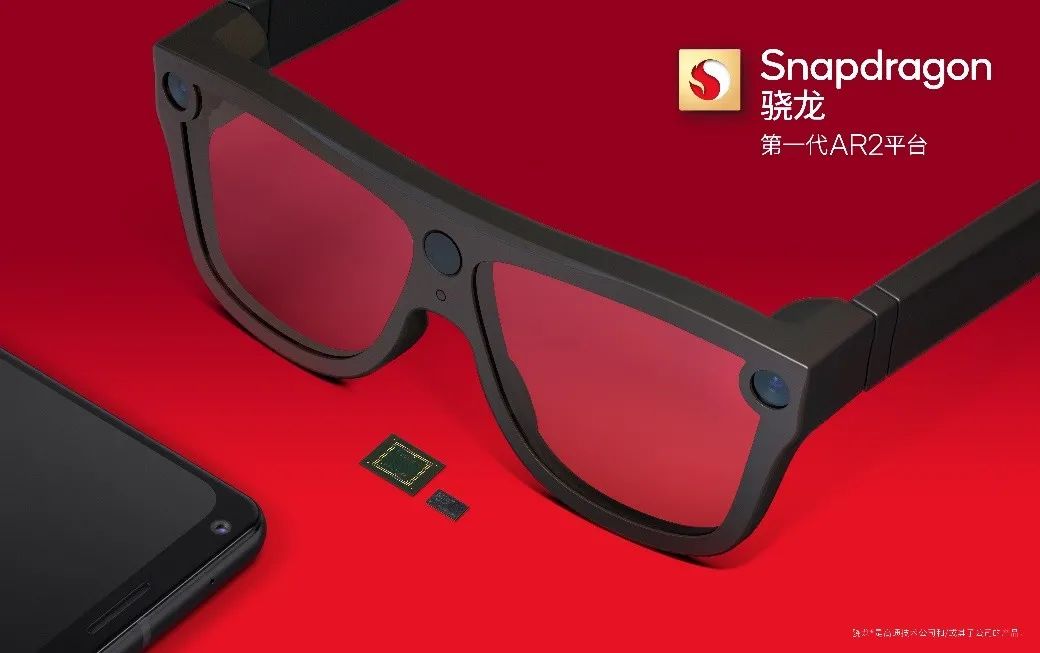 The Snapdragon AR2 uses a multi-chip architecture, including AR processors, AR coprocessors, and connected platforms, among which:

The AR processor is optimized for achieving low latency in motion-to-display (M2P), and supports up to nine parallel cameras for the understanding of user and environment. The PCB area of the main processor in AR glasses is reduced by 40%, the overall AI performance of the platform is increased by 2.5 times, and the power consumption is reduced by 50%, which can support AR glasses to achieve less than 1W power consumption. This will enable a richer experience on AR glasses, as well as a longer period of comfortable wear, to meet the needs of consumer and enterprise usage scenarios.

The AR coprocessor aggregates camera and sensor data and supports eye tracking and iris authentication for visually focused rendering, enabling workload optimization for only what the user is looking at to help reduce power consumption.

The connected platform utilizes the Qualcomm FastConnect™ 7800 connectivity system to turn on the ultra-fast commercial Wi-Fi 7 connection, enabling latency between AR glasses and a smartphone or host terminal to be less than 2 milliseconds. 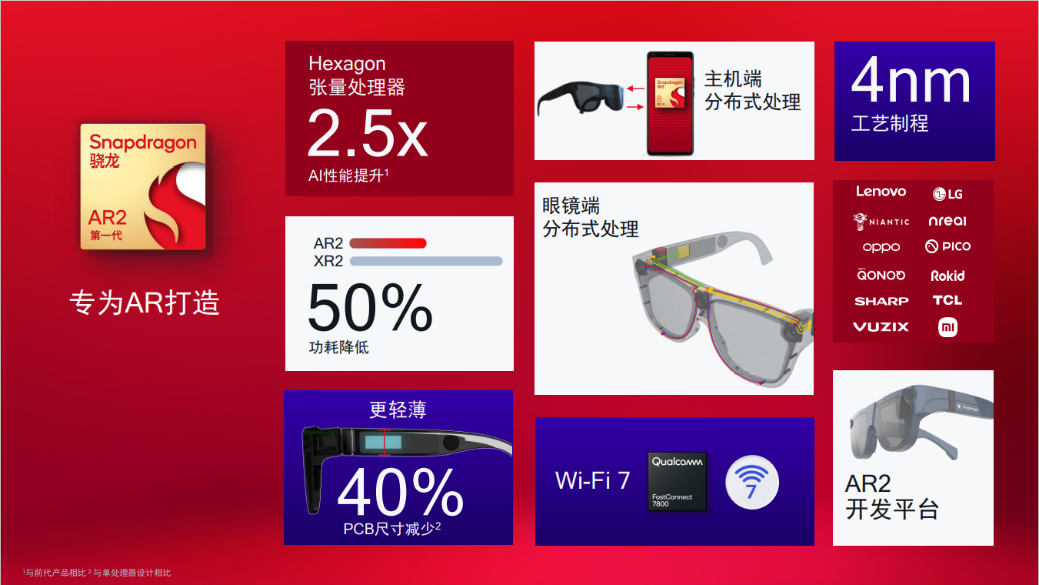 In addition, Qualcomm announced at the summit that many OEMs such as Lenovo, LG, Nreal, OPPO, PICO, QONOQ, Rokid, SHARP, TCL, Vuzix and Xiaomi have entered different stages of product development with Snapdragon AR2. 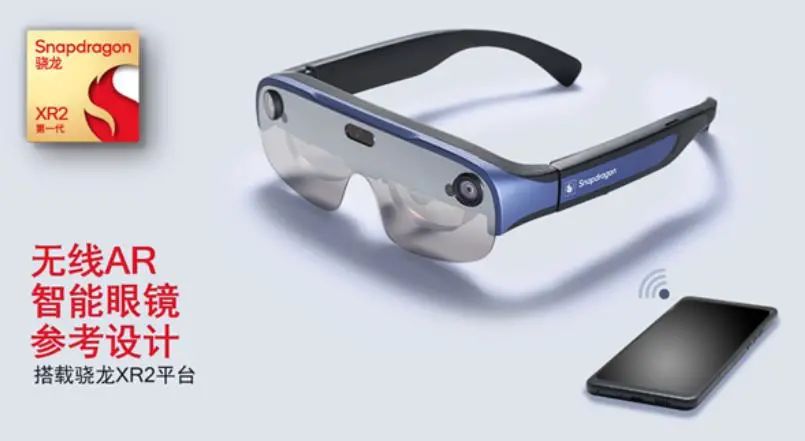 However, when the Snapdragon AR platform was released, Qualcomm announced which manufacturers would be used to make AR glasses products. Why are the responses so different for the same Qualcomm product? The main reasons are as follows:

Qualcomm launched the XR1 a few years ago, then the XR2 platform, and the latest XR2+ platform, all of which are single-chip solutions, just like the Snapdragon 8 series of smartphones and so on. The single-chip solution is a very good solution for VR/AR all-in-one machines. Taking XR2 as an example, it can independently complete complex functions such as high-performance rendering, 6DoF positioning tracking, gesture recognition, and eye tracking. This is all done on a single chip, because the overall space of the all-in-one solution is relatively rich, so it can meet such heavy tasks. But in AR glasses, the single-chip solution will be obviously inapplicable in practical applications. 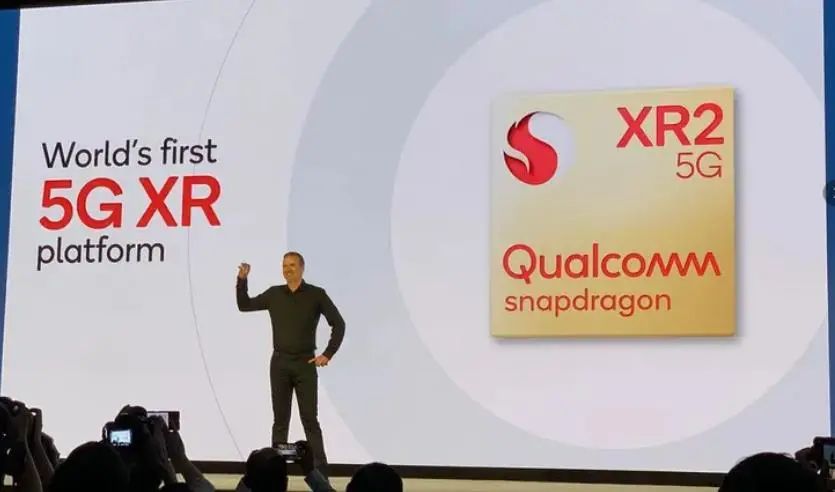 Based on the multi-chip distributed architecture, the Snapdragon AR2 can give full play to its advantages by disassembling the main chip, coprocessor and network communication module. Qualcomm said that the Snapdragon AR2 platform is specifically optimized for a distributed processing architecture, and it performs better in terms of size, power consumption, and performance. 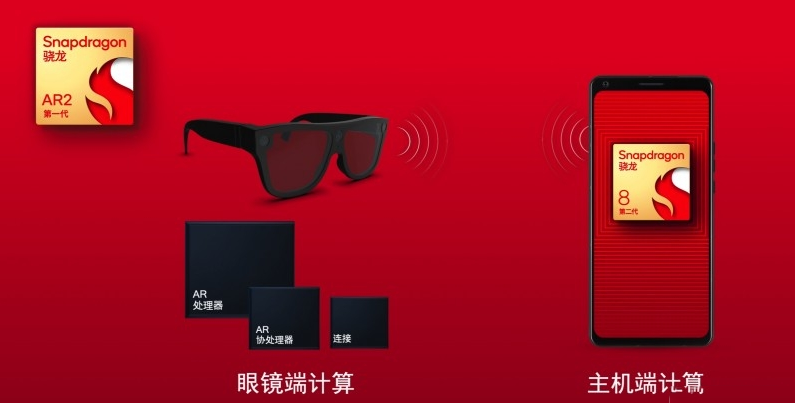 Looking at the difference between the Snapdragon XR1, XR2 and the Snapdragon AR2, you will find that Qualcomm finally figured it out: the platform of AR glasses is different from the platform for making smartphones. The operability of the latter is too great that all the functions can be put on one chip. Consumers' perception of product weight is light, which makes consumers and manufacturers satisfied. The operability of the former is too small, if all the functions are placed on a chip, the weight of the product makes consumers unwilling to pay for it, and manufacturers are naturally reluctant to adopt.

As a chip manufacturer, Qualcomm figured out how to make an AR glasses platform. It is of great significance to the development of AR glasses. With the suitable chip, there will be manufacturers to make products, such as smartphone manufacturers.

Many of those who make AR glasses and VR headsets say that AR/VR devices can replace smartphones, which makes smartphone manufacturers very uncomfortable. For example, Zuckerberg, CEO of Meta, believes that VR and AR are the beginning of a new platform that will eventually replace smartphones; Even Apple CEO Tim Cook said he hopes AR will completely replace iPhone in 10 years. That is, if this device develops well, mobile phones will be goodbye from our lives in 10 years. 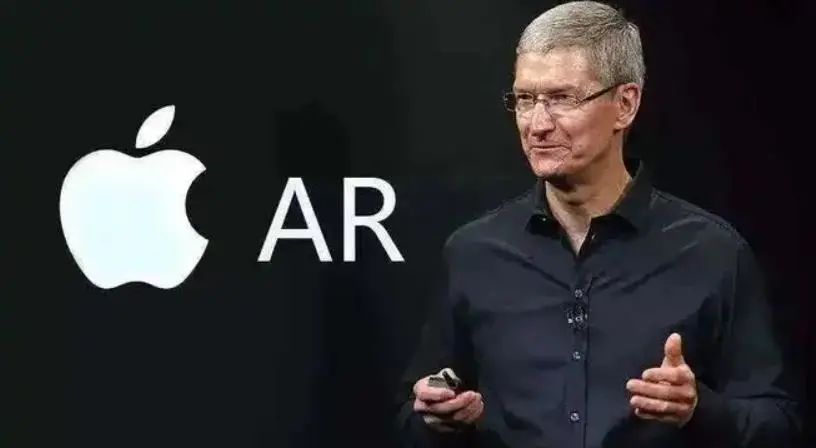 Qualcomm redesigned the AR platform and launched the Snapdragon AR2, which made many smartphone manufacturers excited. Because the launch of Snapdragon AR2 makes it impossible for AR glasses to replace smart phones, AR glasses will become an accessory for smartphones.

Although the Snapdragon AR2 can make AR glasses lighter and thinner and easy to wear, its computing power is not strong, and it needs to rely on external equipment to complete the application of some scenarios. In an interview with Si Hongguo, vice president and general manager of XR business in Qualcomm, and Guo Peng, head of XR business in Qualcomm in China, some media asked: " Can AR glasses equipped with Snapdragon AR2 work independently?”

In response, they said that they cannot work independently and must be used with separate computing terminals, where the logic is similar to the XR2 wireless AR reference design. 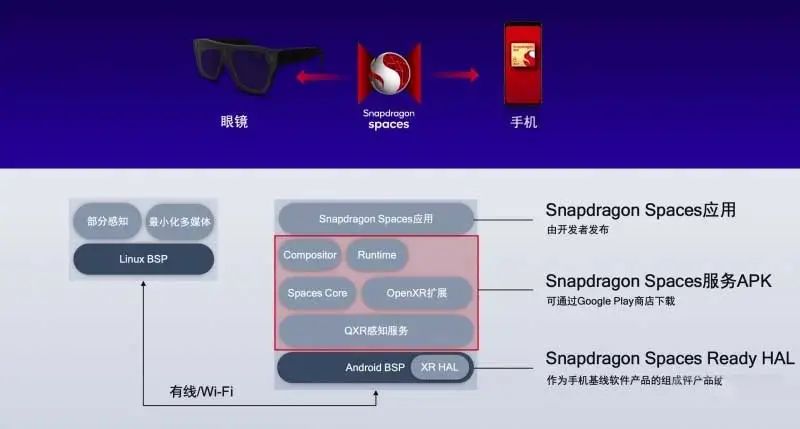 The failure of the AR/VR all-in-one to challenge the smartphone has become an accessory for the latter. AR glasses also failed, and smartphones are still people's favorite smart device. So the aforementioned smartphone manufacturers will do AR glasses, such as Xiaomi, OPPO, etc., what surprises will they bring to AR glasses?

I think it may be a brand new way of connection and interaction, as to what exactly is it? I don't know either. However, we can refer to the impact of smartphone manufacturer Huawei crossover into laptops.

Before Huawei made laptops, traditional notebooks were "ponderosity" and "extremely lacking in system deep optimization and software innovation capabilities". Huawei creates a "super terminal" through features such as "multi-screen collaboration" and "one screen with three windows", which greatly simplifies the past complex interaction scene of multi-device, multi-task and multi-window to "one super terminal", thus greatly improving work efficiency.

Taking Huawei MateBook X Pro as an example, a "productivity combination" can be formed by "pulling" with Huawei tablets, mobile phones, etc. on the interactive page of the super terminal, providing users with three cross-screen collaboration modes of mirroring, expansion, and sharing. Users can use the intelligent search function of PC to directly retrieve the files in tablets and mobile phones for editing, and the mobile terminal can be saved across the screen; files such as pictures and documents can also be dragged between multiple devices without consume carrier data fees; Users can also use the tablet as a "sketchpad" or "extended screen" of the PC, and the tablet can also use the keyboard and mouse of the PC for fast input and image editing.

After Huawei notebook computers launched features such as "one screen with three windows" and "multi-screen collaboration", it triggered the "following innovation" of many domestic enterprises. Xiaomi, for example, launched the “Magic Enjoy Center” in July, which supports content switching between multiple devices. 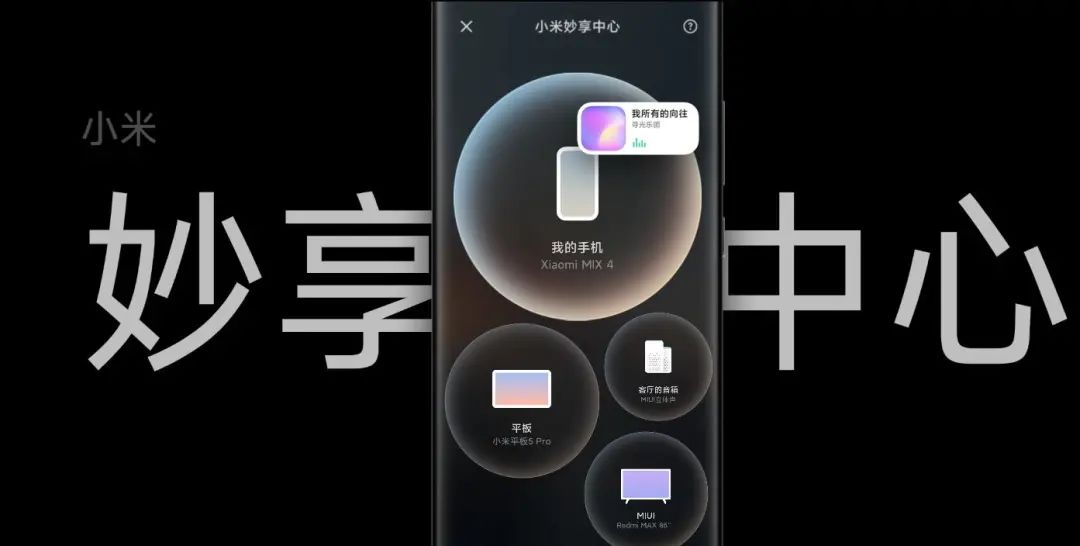 It can be seen from Huawei's case that smartphone manufacturers are very innovative. It is believed that their entry will bring a new user experience to AR glasses.

Smartphone Manufacturers that have Already Laid Out

It is worth mentioning that before Qualcomm announced that Xiaomi entered the AR glasses, Xiaomi ecological chain enterprise Honeycomb Technology has made an AR glasses —— Mi Jia glasses camera, and has achieved good results. 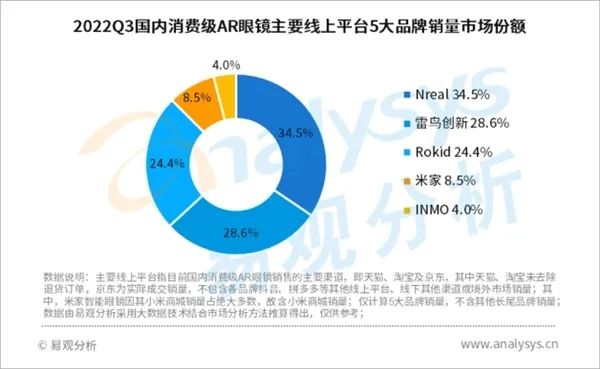 We should know that Mi Jia AR glasses was released in August, its market share in the third quarter directly to the fourth domestic, it can be seen that its strength is very terrible. If Mijia AR glasses use Xiaomi's brand name and are vigorously promoted, its market share will be higher. If Xiaomi personally makes AR glasses, maybe the market structure of domestic AR glasses will change.

As for OPPO, another mobile phone manufacturer mentioned by Qualcomm, it had earlier launched an OPPO Air Glass with a price of 4999 yuan, plus a monocular split design, which did not get too much attention from the market. The latest news shows that OPPO's brand OnePlus asked netizens for AR glasses design inspiration, so it seems that OPPO intends to enter the AR glasses market with its sub-brand OnePlus.

Words in the End

With the support of chip manufacturers, smartphone manufacturers and national policies, we have reason to believe that AR glasses have already begun to develop. So are consumers ready? This requires the joint efforts of the industry.

RayClouds is a high-tech enterprise focusing on optical measurement. We took the market as the guide, took scientific research as the core, and took innovation as the method to developed the virtual display analyzer, aiming to enable AR smart glasses to improve the imaging quality, and help related manufacturers to bring better visual experience for users.

Want to find out more?
If you are interested in more information about our products or services, send us an inquiry.
Contact us